Blockchain: the Next Healthcare Revolution?

Blockchain has been growing in popularity over the past two years (see figure 1), but it has only recently begun to gain traction in healthcare. In January 2016, the use of blockchain in healthcare was just a blip at the edge of the radar. Flash forward 10 months, and it's now a hot topic. 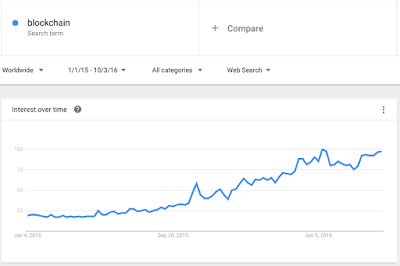 Here's an update on recent developments for blockchain in healthcare.

ONC/NIST Ideation Challenge Conference: Use of Blockchain for Healthcare and Research

ONC and NIST held a workshop on September 26-27, 2016 at NIST's Gaithersburg, MD headquarters as part of the blockchain ideation challenge they sponsored. The industry-wide meeting attracted more than 160 representatives from business, academia and government.
The event kicked off with an overview of blockchain and its cryptographic underpinnings, and then transitioned to a series of panel discussions and presentations from 8 of the 15 ideation challenge winners.
The key takeaway for me was that the industry is in "try everything" mode when it comes to blockchain. Blockchain is a compelling technology that promises to solve some of healthcare's longstanding problems related to privacy, security, data sharing and audit trails. However, the healthcare industry needs to identify use cases where blockchain will truly succeed. We're also still trying to figure out the best approach for integrating blockchain into healthcare's technology stack without disrupting existing users and applications.
One of the most compelling presentations was from the team at the MIT Media Lab, that presented its prototype for MedRec, a blockchain-based method of sharing data among patients and their various providers. While most of the presentations were theoretical in nature, MedRec is notable because the team has built a working prototype on Etherium in conjunction with Beth Israel Deaconess Medical Center.

Sovrin.org, a blockchain-based provider of self-sovereign identity services, recently launched September 29, 2016. This new service allows individuals to assert control over their identity. Much like a Facebook or Twitter ID, it will allow for federated login services. This means that in addition to "login with Facebook," you may soon begin seeing buttons on websites that say "log in with Sovrin."
The differentiating feature with Sovrin is that the individual, not a social media company, is in control of the user's identity. In fact no central authority, including Sovrin, is in control because of the distributed blockchain back end upon which the service is created.
Read more about Sovrin in their FAQ.

Nashville was home to the Distributed: Health conference on October 3, 2016 following a hackathon October 1-2. In contrast to the academic direction of the NIST blockchain event, this meeting focused on practical uses of the technology. More than 600 attendees from all healthcare market segments convened to learn about current research projects and proofs of concept. Despite the different focus, the “try everything” theme was the same. "2016 is the year of the pilot," declared Jeff Garzik of Bloq.
Blockchain's earliest use cases were in the Fintech sector, and there's no question it's here to stay in healthcare. The growing number of meetings about blockchain in healthcare this autumn is proof of that.
Posted by Drew at 4:22 PM

Email ThisBlogThis!Share to TwitterShare to FacebookShare to Pinterest
Labels: blockchain