HIMSS16 Recap: A Study in Hashtags

My previous blog post previewed the HIMSS 2016 Conference and Exhibition based on the selection of educational topics on the agenda. With HIMSS16 behind us, it’s time to look back to see which topics actually created the most buzz.
A look at the Twittersphere provides a way to tap into the conference’s zeitgeist. For this analysis I downloaded over 82,000 tweets tagged with the official conference hashtag, #HIMSS16 starting at midnight on Monday, February 29 through Thursday, March 3 (ending just before midnight).
“Stop by our booth and be entered to win our giveaway”
A quick look at the words used in #HIMSS16 tweets makes it clear that vendors dominated the conversation imploring attendees to visit their booths. This is probably in line with expectations, but it’s not especially interesting content for most readers. 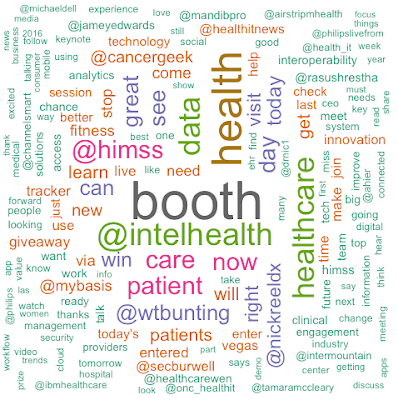 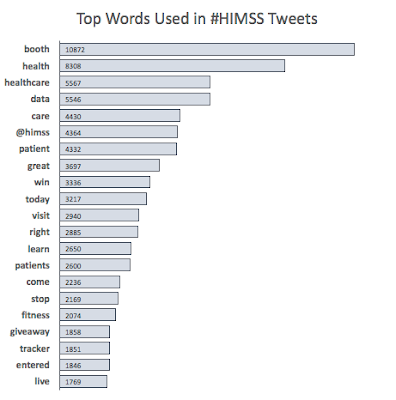 “Healthcare”
Looking at additional hashtags included with  #HIMSS16  provides a more topical view of the conversation. 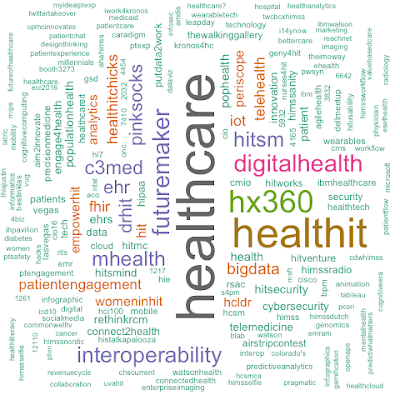 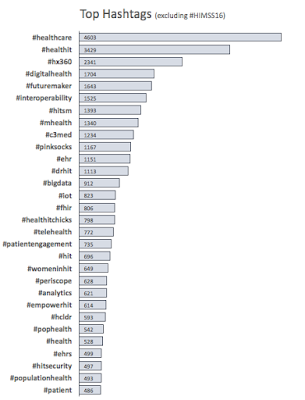 Besides the general hashtags (e.g.,  #healthcare and #healthit), there are several others for more specific topics. For the most part, there are no surprises here:
The conclusion from these first two breakdowns of the data is that the HIMSS conversation on Twitter was dominated by vendors seeking booth visitors. Attendees visiting these booths expected to learn about a wide variety of subjects, which weren’t always in alignment with the topics of the educational sessions.
Intermountain Healthcare – How to Do Twitter Right!
One of the highest-ranking Twitter accounts among the week’s tagged tweets was @Intermountain, the Twitter handle for Intermountain Healthcare. An analysis of their tweets reveals a different pattern emerging when compared to the conversation at large. 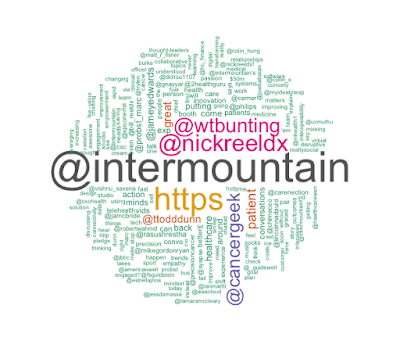 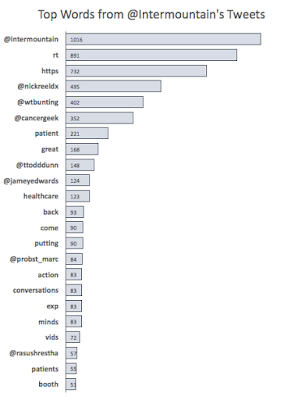 Intermountain’s top words are:
The result of Intermountain’s effective Twitter strategy was an interactive conversation about the conference and exhibition that provided additional, richer information. A review of their tweets shows a three-pronged approach:
Recommendations
Next year I plan to shift my focus away from the #HIMSS17 hashtag and instead follow a small group of bellwether organizations, like @Intermountain, that provide a value-added curation of the broader tweet stream.
Colophon
I conducted the analysis for this article using R and the twitteR package, which uses Twitter’s APIs to download messages. I created the word clouds with the R Wordcloud package.
I did quite a lot of the text processing and cleanup in TextWrangler for Macintosh. All those abbreviations, emoticons and punctuation marks that are easy to read in tweets take a long time to clean up for computer analysis!
Microsoft Excel produced the bar charts.
Posted by Drew at 9:12 AM